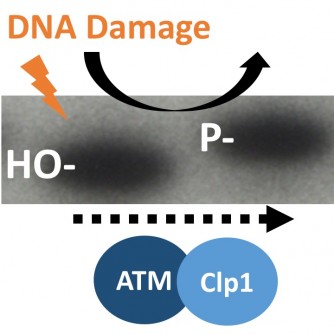 MicroRNA molecules were discovered only relatively recently in humans, but have been shown to play a pivotal role in how a cell responds to injury or stress, such as radiation therapy. With radiation treatment currently used in over two-thirds of cancer patients, there remains a critical need for researchers and clinicians to better understand the genetics behind the radiation response and develop more personalized therapies for patients.

A UCLA-led study has for the first time shown that microRNAs, specifically the microRNA known as miR-34, can sit silently in an inactive state in a cell waiting for a signal to turn it on. The discovery turns on its head the long-held notion that a microRNA when made is always already activated and ready to work, and shows for the first time that microRNAs can be controlled in a way similar to proteins, waiting for stress signals to turn them on.

The study will be published online March 21 in the journal Nature Communications.

Dr. Joanne Weidhaas, the study’s lead author and a UCLA Jonsson Comprehensive Cancer Center member, investigated numerous human cell lines. Her team found that there was an abundance of miR-34 in cells before radiation treatment, but that these molecules were inactive, or not functioning. It was only after radiation that the miR-34 sitting in the cells was activated, they discovered, and that a major radiation response protein called ATM was responsible.

It has been previously known that microRNA levels change immediately following radiation (often within the initial three to six-hour window), and that the level of miR-34 grows over time through the creation of new miR-34. However, the activation of an existing pool of miR-34 after radiation is an entirely new mechanism not previously discovered for any microRNA.

The research highlights the importance of miR-34 in the response to stress, and cancer treatment, Weidhaas said.

“This is a significant new insight into how we are wired for this response,” said Weidhaas, a professor of radiation oncology at UCLA. “These findings have the potential to allow us to harness this mechanism to better treat patients with radiation, targeting tumors but protecting normal tissues. Or, we may in fact find that there are differences in how well this mechanism works in some people versus others, explaining why some are more radiosensitive or radio resistant from the start.”

Weidhaas’ team plans to further examine how miR-34 is created in a “deactivated” state in cells. The scientists also will assess the differences from patients receiving radiation therapy to help identify patient populations that are more likely to respond better to traditional therapy.

The research was supported by the National Institutes of Health.