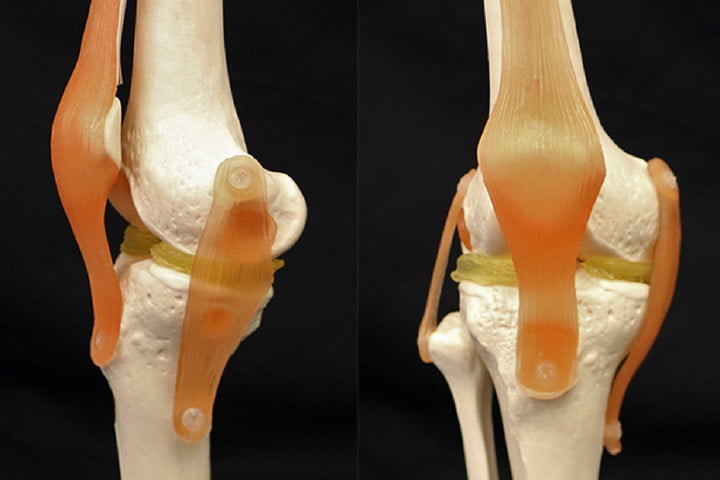 Wave a tentative goodbye to knee braces! Researchers from Duke University have created a new type of 3D bioprinting material they hope will one day be able to help form cartilage implants for patients with damaged knees.

“We’ve developed the first 3D-printable hydrogel that surpasses both the compression strength and elasticity of cartilage,” Feichen Yang, a researcher on the project, told Digital Trends. “This high strength makes it a good candidate for meniscus replacement.”

The work is described in a new paper published in the journal ACS Biomaterials Science and Engineering, which spells out how the cartilage-mimicking structures could be used to create customized implants on a patient-by-patient basis.

“The biggest challenge was to make the water-like precursors for the hydrogel 3D printable,” Yang continued. “To do this we added nanoclay to the gel precursors to make a solution that is shear-thinning. Shear-thinning means it flows easily when extruded through the nozzle, but after it exits the solution became so viscous it did not flow and could retain its printed shape.”

Another challenge was optimizing the mechanical strength of the gel, although after fine-tuning the finished gel matches the properties of bovine cartilage.

At present, the team members have demonstrated the feasibility of the 3D-printed material using a plastic knee model. In their demo, they scanned this model and then used their double-network hydrogel material to create a 3D model of the menisci. Impressively, the process took just one day to complete.

“One next step for this project could include using multi-materials 3D printers to 3D-print gels that have different elasticities in different positions, in order to better mimic the anisotropic nature of a natural meniscus,” Yang said. “Potentially in the future, an improved version of this material will [then] go through FDA testing procedures, and finally be used by medical surgeons.”